The Euskalduna Conference Centre is a unique building and one of the flagships of the new 21st century’s Bilbao. The Euskalduna Conference Centre is in the very heart of the city, just a few minutes from Bilbao’s international airport and with excellent connections via road, rail and sea. It is within walking distance of most of the city’s hotels, and stands close to solve Bilbao’s major museums (the Guggenheim Museum Bilbao, the Fine Arts Museum and the Ria de Bilbao Maritime Museum).

The building was designed by architects Federico Soriano and Dolores Palacios to resemble a ship under construction, because it stands on the site formerly occupied by the Euskalduna shipyard. It won the Enric Miralles award for architecture at the 6th Spanish Architecture Biennial in 2001.

This 58,200 m² multi-purpose complex is located in the heart of the city of Bilbao, it also has a car park for 475 vehicles and is adjacent to a taxi rank and a tram stop of the city’s modern tramway system.

It hosts a wide range of economic, business, academic, political, institutional, social and cultural events. It is the home of the city’s opera season, organised by ABAO (Friends of the Opera of Bilbao), one of the most highly renowned in Spain and indeed Europe. It is also the home base of the Bilbao Symphony Orchestra (BOS), which was founded in 1920 and has been performing since 1922.

If you want to know more: http://www.euskalduna.eus/en/euskalduna-conference-centre/the-building/

The tower was built in Abandoibarra, a former industrial area located next to the Nervión river that began to be renewed in the early 1990s and where other emblematic projects such as the Guggenheim Museum Bilbao and the Euskalduna Conference Centre have been built.  The entrance to the tower is located at the Euskadi Plaza and the Gala Dinner will take place in the 24th floor, with a unique view of the city.

The Iberdrola tower, being the highest building of Bilbao (165m), was created by César Pelli, an argentinian architech specialised in vertical architecture and author de las Petronas Towers in Kuala Lumpur (452m) and of the Crystal Towers in Madrid (249,5m), the second tallest building in Spain. 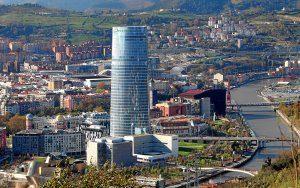 RESER (The European Association for REsearch on SERvices) is a network of research groups and individuals active in services research and policy formulation, mainly located in European countries.